Beer is one of the oldest beverages humans have produced, dating back to at least the fifth millennium BC. Where there was civilization, there was beer. Where there is a community, there usually is a craft brewer. The community of Canmore is no exception, it has its very own brewery, the Grizzly Paw Brewing Company.


The Grizzly Paw Brewing Company is a brewery, and a brewpub located on Canmore’s Main Street, in the Canadian Rockies. While Grizzly Paw owner Niall Fraser was living in Sydney, Australia he got the idea of opening a brewing company during his frequent visits to “The Rocks” in Sydney for a pint of beer.

When Niall arrived home in 1992 he started looking for a suitable place to build his own brewpub. During a mini vacation to the Bow Valley Niall found the place where his brewery was to be located: Canmore. On April 29th, 1996, The Grizzly Paw Brewing Company opened its doors to the Bow Valley’s beer drinkers. It was one of the first craft breweries allowed in Alberta, and Canmore was privileged to have it.

The first thing that makes an impression when you visit the Grizzly Paw Brewing Company's brewery, is its awesome building. It is located right next to the Transcanada motorway. You cannot miss it. The building's impressive peaks mimic the iconic mountain peaks of the Bow Valley's Three Sisters. 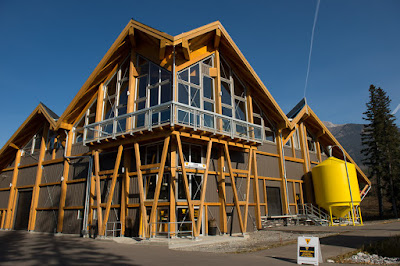 Kristina (Sales and Marketing) greeted us at the door on a cold winters morning with a team of enthusiastic colleagues that were ready to show us around.

The founder, Niall wasn't available to tell us how it all began. Instead, Robert (CEO) and Fred (Operations) enthusiastically showed us what they do while they shared their own personal journey of getting involved with beer, and how they came to join the Grizzly Paw's operations.

What makes the Grizzly Paw unique is its following in the community of Canmore, and also in Alberta at large. The doors are open at the brewery for anyone to see how it is done. Locals work in the business. Everyone is involved in making something. We even found a lost Kiwi, Willy (Our Tour Guide) telling us how he managed to smuggle in some New Zealand hops that they used in a special edition brew. You can taste some of these special brews every Friday evening at the Grizzly Paw Pub.

The pub on Main Street is where all the festivities take place. It is a famous meeting place and easy to spot as you enter the downtown area. "Meet you at the Grizzly", is a saying that easily rolls off the tongue of anyone that is a little familiar with the town and the area. After a hard day of skiing or mountain biking (or producing), the Grizzly's beer is all you need to recover (or fake recovery).

While we "scouted" the location the day before (we had to have a few cold ones to oil the wheels for production), I looked up at the ceiling and saw something intriguing. There were mugs hanging from the ceiling, each with a unique number.

We asked the barman what the story is, and he introduced us the the mug club. It is a neat idea. It ensures you have your own numbered mug for your beverages when at the pub. The mug stays at the pub, and only you get to use it. It truly speaks of the role the pub and brewery plays in the community by encouraging people to return regularly to have a Grizzly in their own mug. 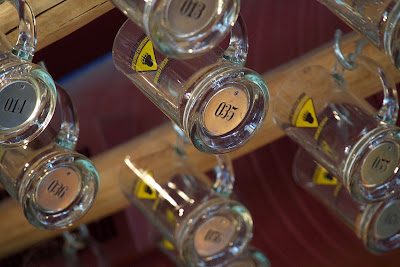 It was only when we interviewed Doug (GM of the Pub) that it really hit home for us, when he explained that mug club members buy beers for others, and leave surprise tokens in mugs. They pay it forward. This is a really neat idea. It gives me yet another excuse to visit the pub. I have to go and check if someone bought me a beer!

Craft breweries play an important role in defining community. It brings people together. It is after all a happy place for the people that live and work in the town. Sadly, large corporations are realizing the value of these craft breweries and are quickly gobbling up the businesses, and destroying the community loyalty to the brand. Hopefully, that won't happen with the Grizzly Paw.

If it does, Canmore will lose a little part of its soul. Luckily, it never takes long for the next crafty entrepreneur to step up and make something delicious. Beer is the foundation of civilization, a large part of the identity of a community, and it will continue to be for as long as you have hard working producers making things.

Thank you to the Grizzly Paw Brewing Company's team for showing us just how beer is made in the Rocky Mountains of Alberta. Cheers!

Get rewarded for supporting our local Producers. Receive special offers and invitations from the Two Cowboys.

Who we are: We are a social enterprise. We are funded through donations and sponsorship.
All our earnings are applied back to covering our costs of marketing and promoting Producers and inspiring local communities. Please support us to bring you more (www.forwardthefavour.com)