When you are far, far away from everyone else in the wold, then innovation becomes a necessity. You cannot rely on other's knowledge, or what people are doing elsewhere. You have to make do with your own plans and innovations for common everyday challenges.


This is one of the reasons why there is an above average number of innovative and creative Producers in New Zealand. Even more so at the remote southern tip of the South Island, in the tiny city of Dunedin. Here we find a Producer that's been leading the world in refrigeration and protein processing innovations.

The world became smaller over the last few decades. At the same time, the New Zealand innovators and makers entered the world stage. These Producers now realize that in many cases, thanks to their isolation, they actually came up with an even better solution to a challenge, than what most of the world could muster. As Mike Lightfoot, the CEO from Milmeq puts it: "This is the Kiwi way!"


Milmeq specializes in capital plant equipment for food processing operations around the world. They provide a turn-key service, including design, manufacturing, installation and maintenance. Their areas of expertise include primary food processing, chilling and freezing and materials handling. They provide performance-enhancing solutions to clients across the meat, poultry, dairy, seafood and horticulture industries. Having already established themselves as industry leaders in their homeland, New Zealand, which is renowned for its meat and dairy exporting industry, they are now recognized globally for offering world-class technologies and support systems.

Dunedin is a short flight south from Auckland. Dunedin airport is probably the most iconic airport in New Zealand because you are landing an aeroplane right in the middle of a cow paddock. I cannot think of many places in the world where you hear the bleating of lambs as you walk to your hire car in the airport carpark. When I land in Dunedin, I like being in New Zealand. This is the place I came to love as an immigrant from South Africa in 2001.

I must confess, our story with Milmeq goes back a little longer than the short trip we did on the 16th of February to go an interview the makers and fabricators of this great business. We've been doing video production work for them before, so we know the people, and we know the business. Their CEO, Mike makes use of every available opportunity to tell the company's great story, and to show the world what they can do. We've been lucky to be a part of that.

Milmeq makes protein processing equipment. Yes, if you eat steak, pork or chicken in Australia and New Zealand, the chances are that it was touched by Milmeq ingenuity somewhere along the line. The business is that phenomenal and that iconic within the industry. They invented plate freezing.

What stood out during the interviews was that the people of Milmeq are trades people with a dedication to their craft. Many of them have been in the business over twenty years. As one gentleman put it: "If I didn't like it, I wouldn't be here. I've been here more than twenty years, so I must like it." This statement stands out for some subtleties that speak volumes about the Kiwi culture, but also shows how Producers are substantially set apart from other people. 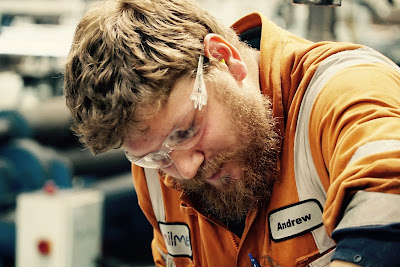 There is a no-nonsense, get-on-with-it attitude, amongst these people. They are modest about their achievements. They have a substantial dedication to quality and loyalty to their company and colleagues. When you build and make big things, you do it within a team. Working as a team is important. They also investing and grow young apprentices, so that they can strengthen the group.

The people of Milmeq are producers. They are vested in their work.  They love what they do. They do it for decades because every day at work they get a chance to leave a bit of themselves behind in what they make. Every day they make it a bit better. They also grow, because every thing they touch delivers value to others, and make our world a better place. Yet, in the end, it is about the beauty of the craft. The value in knowing: "I made this."

It is an honour to have spent time with Mike Lightfoot and his team. He is an inspirational and enthusiastic leader. It was a spectacular experience to do it in Dunedin.

We hope you like what we've produced about Milmeq.

Get rewarded for supporting our local Producers. Receive special offers and invitations from the Two Cowboys.

Who we are: We are a social enterprise. We are funded through donations and sponsorship.
All our earnings are applied back to covering our costs of marketing and promoting Producers and inspiring local communities. Please support us to bring you more (www.forwardthefavour.com)